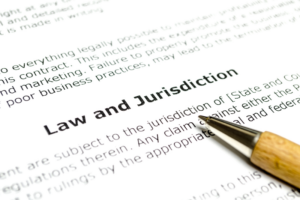 Every state has its own flag, motto, song, flower, and other symbolic markers that distinguish it from its 49 cousins. But not all differences between states are so inconsequential. This is especially true when it comes to the law. Every state has its own laws that govern countless aspects of personal and commercial life, from criminal offenses to divorce and from professional licensing to commercial contracts. Similarly, each state has its own set of courts charged with interpreting those laws and resolving disputes between parties that arise under them.

For instance, when those disputes relate to a contract between parties from different states, whether those states are adjacent or a continent apart, determining which state’s law will apply to the conflict and where the litigation will proceed can have a significant impact on both the outcome of the dispute as well as the expense and disruption involved.

A choice of law provision in a contract provides that the contract will be governed, construed, interpreted, and enforced under the laws of a designated state. Typically, but not always, the choice of law will be that of a state in which one of the parties resides or has their principal place of business. At a minimum, the chosen controlling state must have some nexus, or connection, with the parties or the contract’s subject matter.

As noted, laws relating to contracts and contract disputes can differ dramatically between states, so a choice of law provision has the potential to give one party an advantage in the event of litigation.

For example, a Michigan company that does business in multiple states hires a salesperson in California. The contract contains a non-competition clause and also designates Michigan law as governing the terms of the agreement. While both Michigan and California laws generally disfavor non-competes, California takes a much more restrictive approach to such provisions, meaning a non-compete that would be valid under Michigan law could be deemed void and unenforceable if California law were applied. As such, the choice of Michigan law in the contract tilts the scales in favor of the employer if the salesperson’s activities run afoul of the non-compete.

But while a choice of law provision may favor one party or the other, it also provides clarity and predictability and can spare the parties a costly and protracted court battle about which state’s law should apply when a dispute devolves into litigation.

Choice of Jurisdiction and Venue

Venue is less about authority than it is about geography. A choice of venue provision designates the specific location where any disputes must be resolved. A choice of jurisdiction provision can provide that the courts of the state of Michigan shall have the exclusive authority to hear disputes related to the contract and also contain a choice of venue provision that designates Wayne County as the specific location where the dispute must proceed.

When parties are located far from each other, a choice of venue provision can dramatically change the dynamics of a dispute. One party can pursue or defend a claim on their home turf, using their own attorneys who are familiar with the judges and their local courts’ written and unwritten rules. Those attorneys won’t have to hop on a plane, book hotel rooms, and charge fees for all the time they spend traveling to a venue hundreds or thousands of miles away.

Conversely, a party that agrees to a venue in a far-flung location will have to hire local counsel there in addition to their regular attorneys and may have to appear themselves for a trial or other proceedings. A party may be more inclined to settle a dispute if they are stuck with the additional time, expense, and inconvenience of pursuing or countering litigation in a courthouse far, far away.

Given the potential significance of choice of law and jurisdiction and venue provisions in a contract, you should never gloss over these clauses as mere boilerplate. If you have questions or would like to discuss such provisions, please contact Jacob Eccleston at Kreis Enderle today. 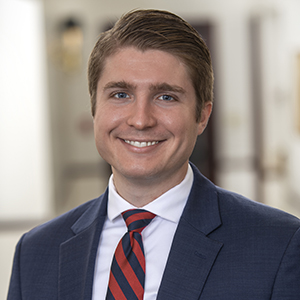 Jacob Eccleston joined the Portage office as an associate focused on real estate, and municipal, planning, and zoning law. Regardless of a matter’s complexity or difficulty, he is dedicated to service and enjoys finding innovative solutions to realize his clients’ goals.

Recent Posts by or including Jacob Eccleston