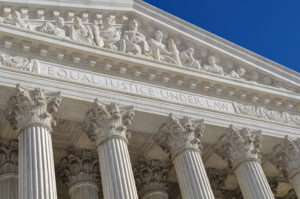 The legality of employment agreements that prevent employees from participating in class actions against their employers over work-related disputes has been much debated of late. A close 5-4 decision from the U.S. Supreme Court today seems to have settled that question – in favor of employers – with broad implications in a wide range of matters, including employment disputes in connection with sexual harassment and other forms of discrimination.

No Violation of Federal Labor Laws

In an opinion authored by Associate Justice Neil Gorsuch, appointed by President Trump, the majority disagreed with the National Labor Relations Board’s earlier ruling that class actions (and collective actions) violated the National Labor Relations Act (NLRA), siding instead with the Trump Administration and employers and their argument that arbitration agreements banning employees’ participating in class actions were enforceable pursuant to the Federal Arbitration Act (FAA).

The NLRB’s position had been that agreements which compel employees to submit to arbitration for all work-related disputes constituted an unlawful interference with their rights to “concerted activities” under the NLRA and, consequently, the FAA did not require enforcement of such agreements and provisions. In response, counsel for the employers argued that in light of any conflict between the two statutes, the tie goes to the FAA.

Relying on legislative intent, the Court stated it must adhere to “a congressional command requiring us to enforce, not override, the terms of the arbitration agreements before us.”

Associate Justice Ruth Bader Ginsburg, writing for the minority, condemned the majority decision as “egregiously wrong,” indicating that “Congressional correction of the court’s elevation of the FAA over workers’ rights to act in concert is urgently in order.”

More than 150 related lawsuits around the country awaited the Court’s decision, including 52 cases stayed by appellate courts pending the ruling. Those actions originated from various sectors, including retail, healthcare, technology, and other industries, and involving such well-known companies as AT&T, Uber, Kmart Corp., UnitedHealth Group Inc., and Neiman Marcus. It is estimated that 25 million Americans in private, non-union jobs are currently subject to arbitration agreements that waive class action participation.

The issue moved further into the spotlight because of the #MeToo movement. Women victimized by sexual harassment advocated against forced arbitration, condemning such provisions as a means for employers to prevent them from seeking their day in court and a mechanism for keeping allegations of workplace harassment, discrimination, and other abuses out of public view.  The Court’s decision seems to favor employers in this regard as well.

State and federal laws governing arbitration agreements, employment status, wage and overtime compensation, wrongful termination, and the right to sue can be perplexing to both employees and employers – and they are guaranteed to change further. If you have questions or issues involving an employment contract or relationship, please contact us today to discuss your situation.