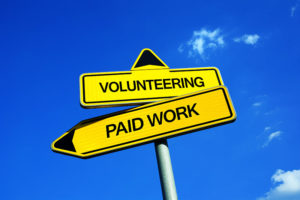 Wage and hour violations in the U.S. are surprisingly common, with employers negligently or intentionally withholding compensation from their workers. While the vast majority of employment litigation brought under the Fair Labor Standards Act (FLSA) and state labor laws involves workers who seek unpaid wages and overtime, a recently decided case out of the U.S. Sixth Circuit Court of Appeals addressed the issue of whether “volunteers” who were forced to work at a church were entitled to compensation.

Ultimately, the answer was no – the church wasn’t obligated to pay the volunteers (despite aggressive tactics to compel them to work), based on the fact that the workers didn’t expect to be paid.

In Acosta vs. Cathedral Buffet, the plaintiffs were members of Grace Cathedral, a 3,000-seat mega-church in Akron, Ohio, which also operated a buffet restaurant. When the restaurant’s staff of 35 paid employees was shorthanded, Televangelist Ernest Angley, leader of the Grace ministry, recruited parishioners to volunteer at the buffet by:

The coercion caused many church members to volunteer without compensation. In 2014, the U.S. Department of Labor’s Wage & Hour Division (DOL) began investigating Cathedral Buffet. After a thorough review of the restaurant’s employment practices over the preceding two years, the DOL concluded that the volunteers were de facto employees and filed a lawsuit against Reverend Angley and Grace Cathedral for unpaid wages and failing to keep accurate records of the hours the volunteers worked in violation of the FLSA.

An Ohio federal district court ruled for the plaintiffs, reasoning that under the economic realities test, the restaurant’s “constant solicitation of volunteer labor, Reverend Angley’s admissions that the use of volunteer labor was intended to save money, and the volunteers’ feelings of pressure and coercion to provide the labor all demonstrate that the volunteers were actually employees.” The judge also determined that the volunteers were “clearly integral to the Buffet’s operations,” and that restaurant managers exercised a “high level of supervision and control” over the member volunteers. The plaintiffs were awarded nearly $200,000 in back pay.

The defendants appealed, and the U.S. Sixth Circuit Court of Appeals reversed. Relying on a 1947 U.S. Supreme Court case, Sixth Circuit found that “a volunteer’s expectation of compensation is a threshold inquiry that must be satisfied before we assess the economic realities of the working relationship.” Because the parishioners had no such expectation, they were not entitled to compensation under the FLSA. Although the court did indicate that evidence of coercion could overcome a volunteer’s lack of expected compensation, “[t]he type of coercion with which the FLSA is concerned is economic in nature, not societal or spiritual.”

Employers often misclassify workers as independent contractors or volunteers to avoid paying minimum wage or overtime. If you suspect that you have been misclassified or denied compensation, you should seek counsel from an employment attorney with experience in FLSA matters.  Please contact us today to discuss your situation.