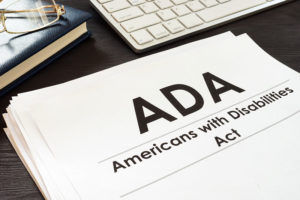 The future is not now when it comes to employment discrimination under the Americans With Disabilities Act (ADA), at least according to the U.S. Court of Appeals for the 11th Circuit. In a September decision, that court held that firing an employee because he or she might develop a “potential future disability” does not violate the ADA’s anti-discrimination provisions.

The case, Lowe v. STME, LLC, presented a novel fact pattern surrounding the termination of a Florida massage therapist by the national chain Massage Envy. The company fired the therapist after she advised them of her plans to visit family in Ghana. Massage Envy’s stated reason for the firing was its concern that the therapist would contract Ebola during her travels and thus put clients at risk upon her return. All parties agreed that the therapist did not have a disability at the time of her termination; neither did she contract the Ebola virus after her trip to Africa.

In response to the therapist’s ADA discrimination complaint, the Equal Employment Opportunity Commission (EEOC) issued a Letter of Determination finding that there was “reasonable cause” to believe that Massage Envy terminated her employment because it “regarded” her as disabled and “perceived” her as having a disability, in violation of the ADA.

“Regarded as Having” a Disability

After the EEOC filed suit, the district court dismissed the EEOC’s claim, declining to expand the ADA’s “regarded as having” prong of the disability definition to cases in which an employer fires an employee at a time when it “perceives [the] employee to be presently healthy with only the potential to become disabled in the future due to voluntary conduct.”

Affirming the district court’s dismissal, the 11th Circuit panel held that “the ADA does not cover this case where an employer perceives a person to be presently healthy with only a potential to become ill and disabled in the future due to the voluntary conduct of overseas travel.”

After noting that “the relevant time period for assessing the existence of a disability, so as to trigger the ADA’s protections, is the time of the alleged discriminatory act,” the court concluded that “even construing the statute broadly, the terms of the ADA protect persons who experience discrimination because of a current, past, or perceived disability—not because of a potential future disability that a healthy person may experience later.”

This was a case of first impression as to the issue of the temporal application of the ADA’s “being regarded as” language, and it is possible that if the question comes before the 6th Circuit, which includes Michigan, that court may reach a different conclusion.

If you have questions or concerns about this court decision, workplace discrimination, or related issues, the employment attorneys at Kreis Enderle can provide you with sound, straightforward counsel to guide your decision-making. To discuss your situation, please contact one of our Employment Law Attorneys.