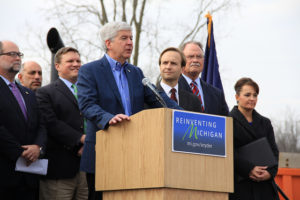 Governor Rick Snyder recently signed into law two initiatives that the Michigan Senate and House of Representatives passed in September 2018 ahead of the November election. The proposals sought an increase in the state minimum wage and required that most employers extend paid sick leave to their employees. Both bills were substantially altered before the Governor put his signature on them.

Senate bill 1175 enables employees to earn one hour of paid sick leave for every 35 hours they work, but also permits employers to limit workers’ total earned sick time to 40 hours annually, with unused time carried over to the next year. The original proposal, which would have applied to all employers, would have allowed employees to earn one hour of paid sick time for every 30 hours worked, with up to nine days of paid sick time each year, depending on the size of their employer. The final iteration of the bill signed by Governor Snyder exempts businesses with 50 or fewer employees.

If you have questions regarding an employer-employee relationship, wage and overtime compensation, tip credits, paid sick leave for workers, or other employment law issue, please contact us today – we will be happy to discuss your situation with you.