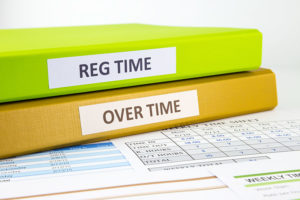 On October 24, Whitmer announced plans to raise the salary threshold for overtime pay eligibility in the state higher than that contained in the U.S. Department of Labor (DOL)’s recently issued final rule change to the Fair Labor Standards Act (FLSA). She estimates that 200,000 more Michigan workers who would not receive overtime pay under the new federal threshold would get such compensation under her proposal, which likely would not come in to effect for at least a year.

FLSA is the federal employment law that establishes minimum wage, overtime pay, and other obligations for almost all American employers. It requires employers to pay all “non-exempt” salaried employees one and one-half times their regular wages for all hours worked over 40 in any given workweek.

Currently, salaried workers whose primary job responsibilities involve “executive, administrative or professional” duties and whose salaries are less than $23,660 per year – or $455 per week – must receive overtime pay.

Effective January 1, 2020, the new federal rule will require employers to pay overtime pay to any eligible employee whose salary is lower than $35,568 per year – or $679 per week.

But this higher federal eligibility level is still significantly lower than the $47,000 cap proposed by the Obama administration. Had a federal court not invalidated that proposed rule in 2017, four million more American workers would be eligible for overtime pay today.

Whitmer’s proposal mirrors the Obama-era plan, which would result in a salary threshold for non-exempt employees of $51,000 or less per year. Michigan is not the only state dissatisfied with federal overtime rules and, if Whitmer is successful in her initiative, the state will join others in expanding overtime pay eligibility. For example, Pennsylvania is set to increase the salary cap to $45,500 by 2022, California will raise it to $62,400 by 2022, and Washington State will make it $79,872 by 2026.

To begin the processes of implementing her proposal, Whitmer directed the state’s Department of Labor and Economic Opportunity to submit a request for rulemaking, which will then allow for public comment and discussion before a final rule is issued.

Will This Overtime Pay Proposal Affect You?

If you believe that the new final federal rule or the proposed Michigan regulation (assuming it takes effect next year) will affect you or your business, meeting with an experienced employment attorney is the best way to understand your rights and obligations.