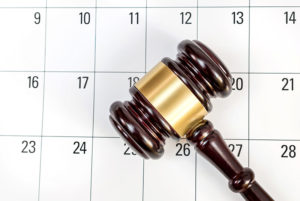 The two directives – AO 2020-3 and AO 2020-4 – toll the deadlines for filing probate and civil cases in the state’s trial courts, and essentially freeze the times for filing applications, original actions, brief, answers, replies, and motions in the Michigan Court of Appeals and Michigan Supreme Court (MSC).

Criminal trial court matters, however, are not tolled, because the Constitution requires them to be timely initiated.

By not allowing the times to run during this period, the Court is allowing all parties the same number of days to file their document after the governor’s Executive Order 2020-21 expires as they would have had before it was issued.

That means you will have the same number of days to file a document on April 13 (when the executive order is currently set to expire) as you did on March 24 when the mandate went into effect. Time periods that would have begun during this shelter-in-place period will not start until April 13. As long as the executive order remains active, these new rules apply, even the expiration date is extended beyond April 13.

Federal Courts Are Not Affected (Mostly)

The MSC orders do not impact civil matters in federal trial courts, including the U.S. District Courts for the Eastern or Western Districts of Michigan. But if a Michigan statute of limitation applies to a federal case (either in diversity action or a federal action that borrows the state statute of limitations), a plaintiff may argue, under the Erie Doctrine, the  MSC orders raise a question of substantive law that forces the Court to consider the issue.

Both the Eastern and Western Districts have limited public access and some filings, but they are operating under their federal administrative orders.

If you are concerned about how the Michigan Supreme Court’s administrative orders might affect a case you wish to bring or your right to appeal during the COVID-19 restrictions, Kreis Enderle’s litigators are ready to counsel you throughout these fast-evolving times. We are working remotely and utilizing phone and video conferencing to communicate with clients.