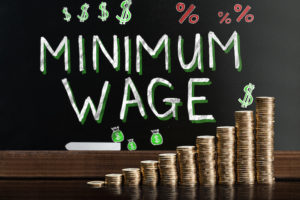 When the clock struck midnight on December 31 and ended the nightmare that was 2020, Michigan’s minimum wage was scheduled to rise. But Michigan workers woke up on New Year’s Day to a minimum wage that remained unchanged and will likely stay that way for the foreseeable future. Why did this planned increase not happen, and when will we see the higher earnings Michigan employees and employers expected?

What Delayed the Increase?

However, the law also contained a “failsafe” provision that prohibits scheduled minimum wage increases from going into effect when the state’s annual unemployment rate for the previous calendar year is above 8.5 percent. We all know the toll the pandemic took on Michigan’s economy last year, including a second-quarter unemployment rate of 20 percent. While that rate fell to 8.6 percent in the third quarter of 2020 and the U.S. Bureau of Labor and Statistics has yet to calculate Michigan’s final annual unemployment rate, the state’s Bureau of Employment Relations said that it is “highly unlikely” that the final rate will fall below the 8.5 percent threshold.

When Should We Expect Michigan’s Minimum Wage to Go Up?

Per the statute, Michigan’s minimum wage rate cannot increase to the scheduled $9.87 per hour until the first calendar year following a year for which the unemployment rate stayed below 8.5 percent. That means Michiganders should not expect to see the minimum wage go up until at least January 2022 (presuming the economy rebounds sufficiently).

If you have questions regarding Michigan’s minimum wage, please contact the Business Law and Employment LawPractice Groups at Kreis Enderle today.