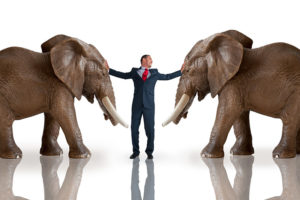 According to the media, we are living in an era of increasing polarization where people and organizations become entrenched on either side of an issue and lose the ability to seek a middle ground. Welcome to my world as a trial attorney, where litigants stubbornly cling to their positions as the civil litigation process often drags on, making a resolution that much more difficult.

Over the course of a 35-year career representing plaintiffs and defendants as an attorney and now helping resolve conflicts as a mediator, I have learned that having opposing sides see the world and the dispute through the eyes of their adversary is one of the best ways to encourage parties to come together and reach agreement.

It’s not only important for parties to understand their adversary’s view of the issues and the motivating factors driving their respective positions, but to also recognize how social, economic, cultural, or other influences can impact their perceptions and realities. Once each side starts to appreciate where and why the other is taking a certain stance, they often find a common thread between them that can eventually lead to a successful settlement of the disagreement.

As a neutral facilitator, I have learned that taking time with each party to see their world, frame the dispute through their eyes, and then convey this viewpoint to the other side can be the most productive element in an ADR process. There are many effective mediation methods and techniques, but getting the parties to understand each other, their unique perspectives, and their rationale is often the most effective.

If you are involved in a conflict or are an attorney representing a client in a lawsuit, I would welcome the opportunity to discuss how alternative dispute resolution can offer a more streamlined, cost-effective, and less contentious option than courtroom litigation.