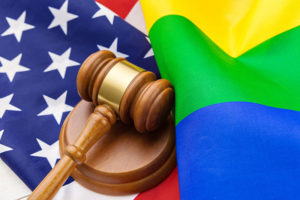 In a milestone win for LGBTQ workers, the U.S. Supreme Court issued an opinion in which it held that Title VII of the Civil Rights Act of 1964 bars employers from engaging in workplace discrimination based on employees’ sexual orientation or gender identity. This historic employment law decision resolves a split between courts across the nation, addressing the question of whether it applies to tens of millions of gay and transgender American workers and also offering clarity to employers and their workplace policies.

The case – Bostock v. Clayton County – involved three separate cases. In the words of Justice Neil Gorsuch, writing for the 6-3 majority, “Each of the cases before us began in the same way: An employer fired a long-time employee shortly after the employee revealed that he or she is homosexual or transgender—and allegedly for no reason other than the employee’s homosexuality or transgender status.”

Title VII prohibits employers from discriminating against employees on the basis of sex, race, religion, national origin, and other protected characteristics and classes. The question before the Court was whether Title VII’s ban on discrimination because of “sex,” a term the statute never defined, also included gender identity or sexual orientation.

Several federal circuit and district courts, as well as the U.S. Equal Employment Opportunity Commission, had previously found that “sex” does involve the broader definition, while many other courts found that it does not. In Bostock, the Trump administration argued that Title VII’s reference to “sex” only pertained to the protection of women in the workplace.

Rejecting that assertion, the Court said that “the answer is clear”:

“An employer who fires an individual for being homosexual or transgender fires that person for traits or actions it would not have questioned in members of a different sex. Sex plays a necessary and undisguisable role in the decision, exactly what Title VII forbids.”

The ruling in Bostock is the Supreme Court’s first significant decision on LGBTQ protections since its 2015 opinion in Obergefell v. Hodges, which addressed the rights of individuals to enter into same-sex marriages. For employers and employees, Bostock dispels any uncertainty about acceptable workplace practices relative to the treatment of gay and transgender workers.

Speak With a Michigan Employment Lawyer

If you have questions about the Supreme Court’s ruling, discrimination, or any other workplace issues, the employment attorneys at Kreis Enderle have the answers. Please contact us today.