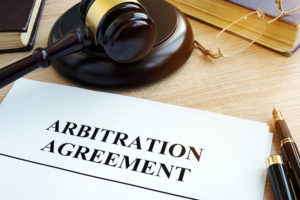 Employees seeking compensation for wage and hour violations frequently attempt to pursue their claims in collective action litigation against an employer. Conversely, employers often try to compel out-of-court arbitration of such lawsuits. When a judge is asked to rule on competing conditional certification and arbitration motions, which request must be decided first?

Failure to pay minimum wage, withholding overtime, denying compensation for “off the clock” work, unlawful tip-pooling, and other claims account for the increasing number of lawsuits asserting violations of the federal Fair Labor Standards Act. When workers employed by the same employer have common experiences and complaints, they may seek the efficiencies offered by collective action litigation but must request formal certification of the plaintiff class to proceed.

Although collective actions offer an economic benefit to the plaintiffs, employers incur substantial expense to defend those suits and may seek to enforce arbitration agreements with class action waivers as a less-expensive alternative. Typically, Plaintiffs favor having judges and juries decide their fates, whereas defendant employers would rather an arbitration panel resolve the disputes.

Because of the parties’ disparate objectives, once the lawsuit is filed, there is often a race to the courthouse to file motions in pursuit of their competing interests – either get the judge to conditionally certify the collective action and thwart mandatory arbitration, or compel arbitration and force the plaintiffs to pursue their claims individually out of court.

In the past few months, the U.S. Fifth and Sixth Circuit Courts of Appeal and other federal appellate courts have written opinions on this precise issue, with employers coming out on top.

In Edwards v. DoorDash, Inc, a group of delivery drivers alleged that they were misclassified as independent contractors, thus making them ineligible for overtime and other benefits. Anticipating an arbitration challenge, the plaintiffs filed a motion for conditional certification of their collective action the same day they filed the lawsuit. In turn, DoorDash brought an emergency motion to stay the conditional certification and compel arbitration pursuant to an arbitration agreement that included a class/collective action waiver.

After the district court found that the arbitration agreement was valid and enforceable, it dismissed the lawsuit, forcing the plaintiffs to arbitrate their claims. On appeal, the Fifth Circuit affirmed the lower court’s ruling, holding that questions pertaining to arbitration are “threshold” matters that should be addressed “at the outset” prior to any certification requests. According to the appellate court, this prioritization prevents certification of a collective or class action that should not have been filed in the first place.

Specifically, the Fifth Circuit ruled that, when considering a motion to compel arbitration, courts should determine 1) whether a valid agreement to arbitrate exists and, if so, 2) whether the plaintiff’s claim is within the scope of that agreement. In instances where there is a delegation clause, trial courts should only concentrate on the first inquiry, and “[i]f there is a delegation clause, the motion to compel arbitration should be granted in almost all cases.”

In Tassy v. Lindsay Entm’t Enters., a similar set of facts was presented.  In Tassy, a group of exotic dancers alleged they were misclassified as independent contractors, thus making them ineligible for overtime and other benefits. The plaintiffs filed a motion for conditional certification of their collective action early in the lawsuit. In turn, the defendant brought an emergency motion to stay the conditional certification and compel arbitration pursuant to an arbitration agreement that included a collective action waiver.

The district court ordered an evidentiary hearing on the issue of whether plaintiff actually signed an arbitration agreement, but the hearing was never held.  A year later, the district court granted the plaintiffs’ conditional certification motion and denied the defendant’s motion to compel arbitration with leave to re-file following an evidentiary hearing.  The defendant appealed.

The Sixth Circuit found that the district court’s failure to “summarily” determine whether the parties formed an agreement to arbitrate was error, holding that, when arbitration is in dispute, the Federal Arbitration Act requires that “courts process the venue question quickly so the parties can get on with the merits of their dispute in the right forum.”  The Sixth Circuit added that taking over a year to resolve the defendant’s arbitration motion was not “quick.”

A few weeks ago, in a close 5-4 decision, the U.S. Supreme Court upheld the legality of employment agreements that prevent employees from participating in class actions over work-related disputes against their employers. That case – known as Epic Systems, the name of one of the employers involved – was seen as a death knell to collective actions in wage and overtime disputes and, combined with the DoorDash and Tassy rulings, and other circuit court opinions, places employees subject to collective action waiver provisions at a distinct disadvantage when pursuing wage violation claims.

In light of Epic Systems and pro-arbitration decisions from other federal circuits, the future of employee collective action litigation is in peril, while employers wielding valid arbitration agreements will have the upper hand.