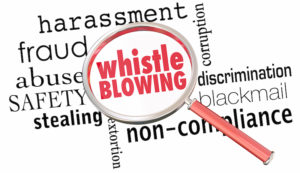 It’s not uncommon for employees who witness or have knowledge of wrongful activity in their workplaces to be hesitant about reporting such activity for fear of losing their jobs or suffering other negative employment consequences. To promote public health and safety and encourage employees to report illegal conduct, the federal government and many states – including Michigan – have enacted employment laws protecting private and public sector workers who “blow the whistle” on bad behavior.

Protection for Whistleblowers in Michigan

Michigan’s Whistleblowers’ Protection Act (WPA) shields employees from termination for protected activities related to reporting illegal conduct by an employer. “Protected activities” include reporting situations at work where they reasonably believe their employer is in violation of a law, rule, or regulation or participating in an investigation of potentially illegal activity. Specifically, the WPA makes it illegal to discharge or discriminate against an employee in retaliation for reporting a suspected violation of a federal, state, or local law or for participating in an investigation, hearing, inquiry, or court action.

The whistleblowing employee must make the report verbally or in writing to a representative of a public body (such as a state officer, state agency, school board, law enforcement agency, or member of the judiciary). An employee who merely discloses or reports wrongdoing to a supervisor or internal department (like accounting or human resources) is not protected by the law.

In some cases, employees may successfully claim that they were “about to report” a suspected violation. Such a claim would require the worker to prove by clear and convincing evidence that he or she was on the verge of reporting an actual or suspected violation, and that the person who initiated the adverse employment action must have been aware that they were about to report the violation.

The reporting employee does not have to prove that an actual violation of the law occurred as long as the employee suspects in good faith when they make the report that a violation of the law has occurred or will occur in the future. The whistleblower bears the burden of establishing that his or her belief that a report to a public body was reasonable and necessary and done with the intent to inform and protect the public. An employee who knows that the report is false or baseless is not protected by the law, and Michigan courts have also rejected claims where the plaintiff’s primary motive appeared to be self-serving or manipulative.

Filing a Lawsuit Under Michigan’s WPA

If an employee is fired or adversely treated at work as a result of blowing the whistle, he or she may pursue legal action against the employer.

Plaintiffs must show that they engaged in an activity protected under the WPA (reporting or threatening to report illegal activity), and that their engagement in a protected activity was causally related to an adverse employment action taken against them (termination, demotion, loss of seniority, disciplinary action, etc.). This means that a plaintiff must prove that the employer had knowledge of the worker’s activities and that those activities were directly tied to the adverse action. A worker who was laid off with dozens of other employees for seasonal lack of work, for example, could struggle to show that his termination was causally related to a legitimate, good faith report of employer misconduct.

Unlike most other employment-related lawsuits, a claim under the WPA must be brought within 90 days of the occurrence of the alleged violation (the date the employee was terminated in retaliation for whistleblowing activities, for example). A successful claimant may be entitled to a full range of damages, including back pay and front pay, damages for emotional distress, legal costs, and reasonable attorney fees.

The federal government passed the federal Whistleblower Protection Act of 1989 to protect federal employees from retaliatory action for disclosing information about dishonest or illegal activities in government organizations. The law empowered the Office of Special Counsel (OSC) to represent employees who wished to report a violation of law, rule, or regulation, gross mismanagement, gross waste of funds, abuse of authority, and substantial and specific danger to public health or safety.

The Whistleblower Protection Enhancement Act of 2012 expanded the law’s protection, but unfortunately, the protections for federal employees remain riddled with exceptions, technicalities, and exclusions. If you are an employee of a federal agency, contractor, or member of the armed services, it may be advisable to consult with an attorney beforetaking any action to report government wrongdoing.

Numerous federal statutes also have whistleblower provisions for civilian employees, such as:

Although the statutes share the same general requirements to bring a claim (that a plaintiff has engaged in protected activity, of which the employer had knowledge, and because of that activity suffered an adverse employment action), there are important distinctions. Again, an experienced attorney can help evaluate the whistleblower’s particular situation and any potential claims he or she may have.